Help Spread the Word about Autism in China 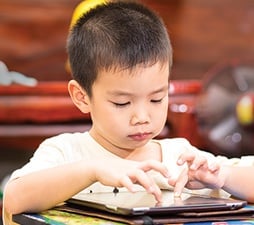 Before I came to study in the US seven months ago, “autism” was just a word I memorized when I prepared for standardized tests. I seldom encountered the word in a contextualized situation in my life, and I never concerned myself with people who lived with this word.
When I first took a bus in Boston, I saw an ad for services for children with autism; in a course I took in fall semester, I met a girl whose interest was in special education because she had an unforgettable experience teaching mathematics to her best friend’s brother who has autism; there were many classroom discussions in which someone would bring up his or her experience with children with autism; and believe it or not, I attended a TED talk last week, and the speaker happened to mention some medical technology that had the potential to diagnose autism.

I couldn’t help but wonder about, and start to research autism in my home country, China.

Most Children in China Have Not Been Diagnosed

The first official diagnosis of autism in China was reported in a Chinese journal in the early 1980s. Today, more than 30 years after the first official diagnosis, most people in the country still have little knowledge about autism, or Autism Spectrum Disorders (ASD), and they consider it as a rare disease affecting a very small group of people. This is partly because children with autism are often kept home, deprived of education and community life[i]. In addition, with 75%-80% of China’s population living in rural areas where access to professionals is limited, it is estimated that only 20% of the children affected by ASD have been identified or diagnosed[ii]. Although no nation-wide studies have been conducted to estimate the total number of children with ASD in China, the 1% prevalence estimate around the world is applicable in any country, as the occurrence of autism has nothing to do with race, ethnicity, or social background[iii].

Early Diagnosis and Intervention are Essential

Even among those families who have both awareness and access, research has suggested that there exists considerable delay along the pathway to diagnosis and intervention for children with ASD. A study that interviewed 69 parents of children with an existing diagnosis of autism reported a mean of 7.1 months’ delay between first awareness and diagnosis and 6.5 months between diagnosis and initial intervention[iv]. In addition, many parents would apply for a spot at the most well-known centers for intervention and wait an average of 8 months before a spot became available. The same study also found that although a disability certificate would entitle the holder to an allowance from the local government, only 12% of the families applied for it, as most parents did not want their children’s condition to be on the records for the rest of their lives.

Although no effective cure for autism has been found to date, early diagnosis and intervention have proved to be vital to improving independent functioning of children with ASD and thus to improving the quality of their life. However, many children with autism in China are missing the best time (i.e., before age 3) for early intense intervention by the time they are diagnosedi. The delay in detection, diagnosis, and initial intervention is attributable to various factors: the under-developed service system, the stigma associated with mental illness, high parental expectations elevated by the one-child policy, lack of understanding of child development, old beliefs equating delayed development of language skills in early childhood with future high intelligence, financial burden, etc.[v]

While acknowledging all of the contributors to the delay, a staff member who works at “Beijing Stars and Rain” Education Institute for Children with Autism pointed out that a well-developed service system was what was most needed. This should include:

A sufficient number of trained personnel
Access to diagnosis and treatment across the country
Equal opportunities to receive education
Programs disseminating information to parents of children with autism
Programs supporting teens and adults with autism
And policies that lift financial burdens of families with children who have autism.

The challenges for families with children who have autism in China may be daunting and even frustrating, but I was glad, and a little relieved, when I found the website of “Beijing Stars and Rain”, which provided articles and answers to help the public learn more about autism, guidelines assisting parents in detecting the symptoms at early stages, information about hospitals across the country where children could be diagnosed, and a community where families with children who have autism could communicate and support each other. Besides, “Stars and Rain” offers individualized Applied Behavior Analysis (ABA) training courses to parents so that parents know how to help their children develop their skills through interactive activities at home. Fortunately, more companies and individuals both in China and abroad are showing support for children with autism in China and are donating money to institutes like “Stars and Rain”.

April 2, 2016 is the eighth annual World Autism Awareness Day. Autism Speaks, a worldwide leading autism science and advocacy organization, is celebrating its international “Light It Up Blue” campaign by encouraging landmarks, skyscrapers, schools, businesses and homes across the globe to shine bright blue lights and is asking individuals to wear blue on that day in honor of the millions of individuals and families affected by autism.

As a student at Harvard Graduate School of Education, I am now involved in the Global Autism Awareness Project initiated by Stages Learning Materials, a publisher and distributor of educational resources and apps for autism therapy, and am working with two Pakistani students on articles and videos that would help raise people’s awareness of autism and spread the word in developing countries like Pakistan and China. I hope in some small way to make a difference in the lives of children who have autism.

You can make a difference, too. Help spread the word.

“Beijing Stars and Rain” Education Institute for Children with Autism:

[1] Centers for Disease Control and Prevention. (2014). Data and statistics. Retrieved from http://www.cdc.gov/ncbddd/autism/data.html#glossary

Sihan Yang is a current student in the master’s program Language and Literacy at Harvard Graduate School of Education. She taught English as a foreign language in China for years before coming to Harvard. Now, she is working as a research assistant for the Education First project on writing development of English as a foreign language (EFL) learners from diverse language/cultural backgrounds. She is also a research assistant in the Harvard Lab for Developmental Studies on a project that examines infants’ ability to selectively encode an actor’s intentions based on their understanding of how syntax predicts meaning. Her interest lies in language and literacy development as well as assessment.