20 years ago most people had never heard the term autism, much less met anyone who had a child with autism. Today the Center for Disease Control estimates that rates of autism are as high as 1 in 88 children, and 1 in 54 boys (Center for Disease Control, 2008).  Autism is the fastest growing developmental disability, with a growth rate of approximately 1,148% (Cavagnaro, 2007). Recent news stories report that number as high as 1 in 68 children. So, what is autism? 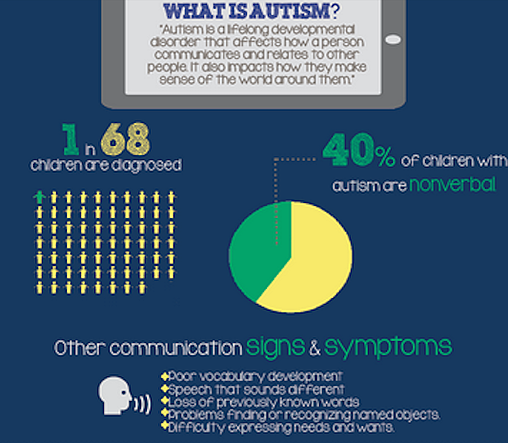 Autism: A Syndrome, not a disease

Autism is a syndrome which is characterized by a group of symptoms occurring in various combinations and degrees, including problems with both verbal and nonverbal communication, difficulties in social interaction, deficits in self-help skills, and behavioral challenges such as tantrums and outbursts. (DSM–IV–TR, 2000, 4th ed., text rev). By definition, a syndrome is a collection of symptoms that occur together, with no known specific cause. This is differentiated from a disease where you can typically identify a specific etiology. In general, with a disease, if you can treat the cause or causes, the symptoms will subside. However with a syndrome, you instead have to address each of the symptoms directly.  Because autism is a syndrome, there is no one cure that, when applied at the core will ameliorate all the symptoms. Rather we look to therapeutic and educational solutions to treat the specific excesses and deficits associated with autism.

Speech language therapy is common for kids with autism. Check out our Autism and Language blog series for ideas on how you can help build early language skills in your child with autism.

Angela Nelson received her BA and JD from UCLA where she studied and practiced behavior psychology under Dr. Ivar Lovaas, and her Ed.M. at the Harvard Graduate School of Education, with a focus on technology innovation and education. As Founder and CEO of Stages Learning Materials, Angela has created autism, special needs and early childhood curriculum products since 1997. In addition to her duties at Stages, Angela writes for multiple industry publications and is on the board of the Education Market Association. In her spare time, Angela makes a mean ginger scallion sauce, and attempts to adjust to non-LA weather.