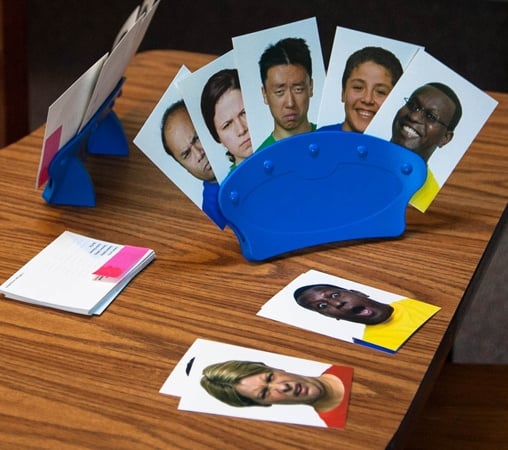 This lesson plan gives the classic card game Go Fish an emotional makeover! Students work on their expressive and receptive vocabulary and understanding of the five basic emotions, all while practicing social skills, taking turns, and following the rules of the game.

In a hurry?  Download a one page description of this lesson plan by clicking on the picture below:

Students will deepen their understanding of the five basic emotions: happy, sad, angry, surprised, and disgusted by practicing expressive and receptive identification of these vocabulary words as they participate with peers in a game of Go Fish.

-   For this activity, you will need to pull the 40 cards that show the people in front of a white background.  These are the only cards you will use for this lesson.

-   Depending on your students’ reading ability, the back of each card may need to be covered to hide the emotion label.  I recommend using the top portion of a Post-It note (the sticky part) or using Scotch Removable Magic Tape to tape a small paper over each label.

-   Students with fine motor difficulties or who don’t like holding the cards may benefit from the use of a card holder for their cards.

-   Some students may benefit from a “cheat sheet” listing the 5 emotions used in the game (with pictures supports if needed) to reference during game play in order to remember which emotions are being learned.  See an example here.

This game is best played with 2 – 5 students, with staff support as needed.

-   Depending on your students, this may be a difficult task requiring cues from previous classroom discussions such as reminders to look at the model’s eyes or mouth for clues as to how they are feeling. 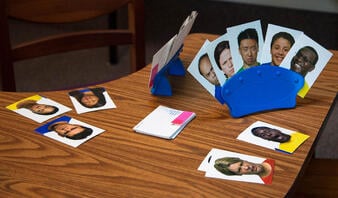 -   Players can be prompted to put similar cards together in their hand to help keep track of the emotions they have.  For example, all cards depicting happy can go together.

-   If a student has been dealt a match from the beginning (possible if it was decided that 2 or 4 cards make a match and each player received 5 cards), that player can group the cards in a pile and place them face up on the table.

-   Students may require assistance to ask for cards from the other players.

-   Depending on a student’s communication abilities, staff may decide that saying the other player’s name and the emotion they are looking for is sufficient. (“Bob, sad.”)

-   Students with higher communication skills may form a complete sentence (“Bob, do you have any sad cards?”) and focus on making eye contact with the other player.

-   Other students may be working on speaking clearly, slowly, and loudly enough for their peers to hear and understand what they are saying.

-   The goal should be helping the students to interact with one another in a manner that is appropriate for each students’ skill set while also accomplishing the task at hand for game play, which in this case is asking another player for a certain emotion card.

-   Students may require assistance to appropriately determine if they have any of the requested emotion in their hand.

-   Some students may have difficulty determining if they have the right emotion (differentiating between sad and angry, for example), while others may simply not want to give up the requested card.
-   Students may also need assistance properly giving the card to the asking player. If they cannot physically reach the player, they could ask another student to pass the card to them. Students should be encouraged to pass the card to the other player, while making eye contact and saying something like, “Yes, here Alice” or even just, “Here”.

-   Again, the goal is helping the students to interact with one another in an appropriate way given their communication skills, while also supporting the turn-taking that occurs during conversation and advancing the play of the game.

-   When a student does this, they must verbally state which emotion is shown on the cards in their match.  As above, depending on their communication skills they may simply say, “disgusted”, or they may say, “I have a match. The cards show disgusted.”

-   The facilitator should then determine that the cards do all represent the emotion stated by the student.  One way to do this is by removing the paper covering the words on the back of each card to reveal the emotion represented on the front of the card.

-   The facilitator may wish to ask questions to the individual player or to the larger group to encourage deeper discussion about the emotions. Questions may include: “What is this person feeling?”; “How can you tell s/he feels that way?”; “What happened to this person that made him/her feel like this?”;  “What has happened to you that made you feel this way before?”

-   These types of questions can be asked at other times as well, such as when a student asks for a particular emotion (“Alice asked Bob for surprised cards. When would someone feel surprised?”), or any other time the questions and following discussion feel natural and helpful for the students.

Want to learn more about the Language Builder Emotion Cards?  Download a free sample of the cards below!