On March 10th of this year, Stages Learning Materials released the Language Builder from Stages App, and we have had an amazing response! Hundreds of parents, therapists, and teachers are now using the Language Builder App to teach 6 early ABA activities to children with autism. But we are far from finished adding features to the app!

I didn't fully appreciate the term iterate until we began developing the Language Builder App. As I sketched out everything I wanted the app to do, the list grew longer each week. Finally, my developer brought me back to reality, asking: 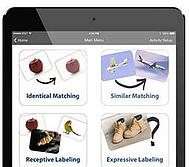 "So, which of these features do you want to release in the first version?"

Here’s where I learned about the process of iteration: the technique of developing and delivering incremental components of product development or process design (thank you Wikipedia!). If I wanted to get a working version of the app into the hands of parents, therapists, and teachers anytime soon, I had to do it in phases. So, for the first version of the app, we released the basic activities, word lists, and settings for a single user. This way we could make sure the activities worked, and that people were able to figure out the settings and word lists, before we expended the effort to build those activities for multiple users. Now that we know the basic app is solid, we are ready to add more features!

Our next release provides the ability to save settings and word lists for unlimited users! This is so exciting for therapists and teachers who are using the app with multiple students. Now you can set the app up to teach Johnny the words apple, car and cat, and those settings will be saved even after you use the app to teach dog, boat and bagel to Suzie. Version 1.1, with the multi-user functionality is in Beta testing right now, and will be released at the beginning of June.

Even more exciting, we have already started design and development for the next feature release, which will add the ability to create custom reports that track the progress of each student... The words they are learning, the number of trials, the percent correct, how often they were prompted, and everything else you need to know to assess and plan a student’s program!

Future releases are slated to include the ability upload your own pictures, record word labels, commands, and reinforcers; a way to program complex lessons and send them to families to practice at home; and even an online portal where families, therapists, and teachers can upload and share data on student progress.

To all of our readers who have already purchased the app – Thank you! Your upgrade to version 1.1 and all future versions is FREE, so keep your eyes out for the upgrade notice! If you haven’t yet downloaded the Language Builder from Stages App, you can learn more by clicking the button below.